DOYLESTOWN, Pa. (February 2018) – Pennsylvania lawmakers who have lent support to the Pennsylvania Biotechnology Center will have a permanent place of honor at the facility in recognition of their contributions to the success of the Center.

The Pennsylvania Biotechnology Center has unveiled its new Public Service Wall of Fame recognizing a select group of current and former legislators who have made extraordinary beneficial contributions to the growth of the Center. The Wall of Fame was unveiled during a ceremony at The Biotech Center on February 23, 2018.

“The support and leadership of these legislators has allowed us to turn an empty warehouse into one of the most successful biotech incubators in the country,” said Timothy Block, PhD, President and Co-Founder of the Pennsylvania Biotechnology Center, as well as the Hepatitis B Foundation and Baruch S. Blumberg Institute, which are headquartered at the Center.  “Without the vision and trust of our leaders in Harrisburg, we would not be here today. We are proud that our Center has turned that vision into a beneficial economic impact for our community, while giving scientists a place where they can grow their ideas into companies.”

During the ceremony, former Gov. Ed Rendell said that helping to turn 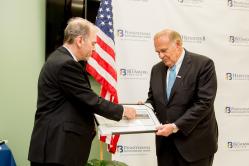 the idea of the Pennsylvania Biotechnology Center into reality was one of his proudest accomplishments. Since it opened in August 2006, during Gov. Rendell’s term, the Center has grown into one of the most successful and productive biotechnology incubators in the country, having generated more than $2 billion in company value, created more than 1,000 jobs, and provided laboratory space for numerous scientific discoveries.

“The work being done here at the Center speaks for itself,” said State Senator Chuck McIlhinney. “As a lawmaker, we love seeing tangible benefit from our investments. With the Biotech Center, the community has gotten a great return on our investment.”

About the Pennsylvania Biotechnology Center:  The Pennsylvania Biotechnology Center offers state-of-the-art laboratory and office space to nonprofit research companies and biotech companies. Managed by the Baruch S. Blumberg Institute and led by a board appointed by the Hepatitis B Foundation, the Center was funded in part by the Commonwealth of Pennsylvania. The facility opened in 2006 in a formerly abandoned warehouse and has since grown to encompass 110,000 square feet on a 10-acre campus. To learn more, visit www.pabiotechbc.org.