State and federal grants covered nearly half of the construction costs.

A $20 million expansion project at the nonprofit Pennsylvania Biotechnology Center (PABC), one of the nation’s most successful life sciences incubators, officially opened today (May 20),  when local elected officials and the nonprofit’s management cut a  ceremonial ribbon on the new building’s front steps. 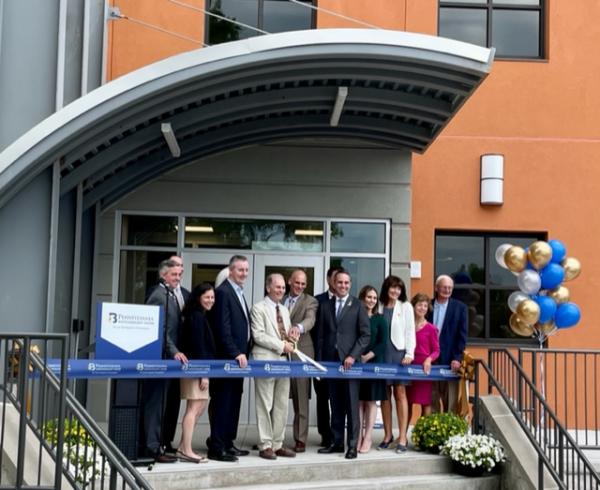 The PABC, which is next to the Doylestown Airport in Buckingham Township (3805 Old Easton Road), has nearly 90 member companies, 50 of which have operations in the facility. The PABC received $4.4 million in grants from the Commonwealth of Pennsylvania for the expansion.

“Entrepreneurs at the Pennsylvania Biotechnology Center have produced more than $2 billion in company value, created hundreds of new jobs and launched several publicly traded companies,” Senator Steve Santarsiero said. “Our state investment not only spurs further economic growth to the area’s biotech sector, but it has the added benefit of helping to save lives and to improve the quality of life for many.”

The PABC expansion also is funded by a $4.7 million grant from the U.S. Economic Development Agency. The remainder of the cost is being financed by the Blumberg Institute.

“We’re confident in Pennsylvania’s future, as our investment in this major expansion clearly demonstrates,” Timothy M. Block, Ph.D., founder, president and CEO of the PABC, said. “We also appreciate the vote of confidence in our operation by state legislators and federal officials, who provided the grants needed to move our project forward.”

Congressman Brian Fitzpatrick said: “The Pennsylvania Biotechnology Center is renowned for its groundbreaking research and advocacy for economic development throughout the region. Under Dr. Block’s leadership, the Biotech Center has experienced exponential growth and has impacted the lives of countless Americans across the country while creating new jobs here locally. I applaud the Biotech Center for their decades-long, lifesaving work and countless contributions to our nation.”

The expansion will lead to additional jobs at the facility, perhaps more than 100, Dr. Block said, along with numerous new companies and millions of dollars in commercial activity. PABC-member companies currently employ more than 300 highly skilled scientists, staff and students.

“We’ve been at full capacity for more than eight years and we have a waiting list of companies, both regionally and nationally, that want to locate in the PABC,” said Louis P. Kassa, MPA, executive vice president and chief operating officer of the PABC and the Blumberg Institute, which manages the center. “This project has created first-class space for new companies to move into the PABC and for us to improve the facilities used by Blumberg Institute scientists. We were fully subscribed when we began to move into the new building last fall, just as we expected.”

Two California companies and one from Boston recently moved some operations into the PABC, noted Kassa, who will become president of the PABC in July, as well as acting chief executive officer of the Blumberg Institute and the parent organization, the Hepatitis B Foundation. Research and development at the facility has produced two FDA-approved drugs and two medical devices now on the market, with more than 10 new drugs and medical devices in clinical trials.

The PABC also houses a teaching lab and state-of-the-art research facilities where college undergraduate and grad students, as well as students from the Central Bucks School District and other area districts, receive training in biomedical research.

The project entails construction of a new 37,000 square-foot rectangular, two-story building between two existing structures, which meant a 40% expansion of the PABC. It provides 15,000 square feet of new laboratory space and a larger main entrance. Other features include more offices, conference rooms and a 112-seat event space. The project also includes infrastructure improvements, such as additional parking and a stormwater holding basin, which is on four acres next to the PABC purchased for that purpose. Construction began in the summer of 2020 and was completed late in 2021.

The construction manager was The Norwood Company. The architect was Steven Cohen of Princeton. Cohen also designed the original facility, which was an empty printing facility and warehouse where nearly 150 people once worked.

The PABC website provides details about PABC membership options and upcoming events, such as the annual Entrepreneur Spotlight, which includes a shark-tank-style session, set for July 21, and the PABC-Blumberg Institute’s annual life sciences industry conference, which will be held on Nov. 17.

More about the Pennsylvania Biotechnology Center (PABC): The PABC is a nonprofit life sciences incubator-accelerator, offering state-of-the-art laboratory and office space to early stage biotech companies, as well as the Hepatitis B Foundation and Blumberg Institute. The PABC uses a highly successful services-based approach to nurture and guide its member companies to success, advancing biotechnology, maximizing synergies among nonprofit scientists and their commercial colleagues, and launching new ideas and discoveries that will make a difference. Managed by the Institute and led by a board appointed by the Foundation, PABC has more than 80 member companies, mostly small to mid-size science, research and pharmaceutical companies. Nearly 50 of those companies have operations on the Doylestown campus. In partnership with Brandywine Realty Trust (NYSE: BDN), the PABC recently opened B+Labs at Cira Centre in Philadelphia’s University City.