Louis P. Kassa, who has been with the PABC since 2014, currently is executive vice president and chief operating officer.

Also next July, Kassa will become the acting chief executive officer of the PABC, Hepatitis B Foundation and Blumberg Institute.

“The Pennsylvania Biotechnology Center will be in excellent hands with Lou Kassa at the helm,” Dr. Block said. “His hands are steady and his vision is far-sighted. With Lou as executive vice president, the PABC has nearly doubled in programmatic size and economic impact over the past seven years.” 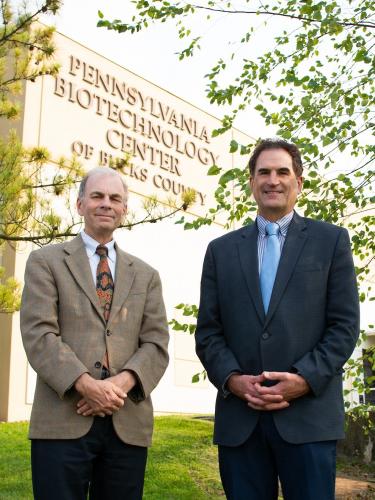 The PABC, which is one of the nation’s most successful life sciences incubators, is managed by the Blumberg Institute. Both were launched by the Hepatitis B Foundation, which was created by Dr. Block, his wife Joan and Jan and Paul Witte just over 30 years ago. Kassa joined all three organizations in 2014.

The PABC has grown dramatically in recent years and now has 80 member companies, 46 of which have operations on site, filling the center to capacity.

In October the PABC will complete a $20 million expansion project centered around a new building on its Doylestown campus. The rectangular, two-story structure will provide 15,000 square feet of new lab space, a more welcoming main entrance, additional offices and conference rooms plus a 200-seat event space. Most of the new space has been allocated to current member companies and the nonprofit organizations on site.

Robert J. Harvie Jr., vice chair of the Board of Bucks County Commissioners, said: “It is rare to find an organization like the Pennsylvania Biotechnology Center, where there are so many leaders of exceptional quality.  Tim Block has left enormous shoes to fill, but Lou Kassa has proven himself to be an extraordinarily dedicated and talented executive. There is no doubt that Lou has the vision and drive to keep the PABC on an upward trajectory.”

Loren Danzis, who chairs the PABC board and is a partner with Fox Rothschild LLP, said Kassa was the natural choice to succeed Dr. Block.

“Lou has taken the operation to a new level and has the strategic leadership approach that will ensure the continued growth and evolution of the PABC,” Danzis said. “He inspires confidence among those who work for the organizations and our many partners, particularly the center’s member companies. The momentum that Lou has helped build is exciting and I’m eager to see what’s ahead for us.”

In January, the PABC will be opening B.Labs at Cira Centre in partnership with Brandywine Realty Trust. B.Labs is a 50,000 square-foot life science incubator in the Schuylkill Yards neighborhood in University City, Philadelphia.

Before joining the PABC and its sister organizations, Kassa previously was state director and chief operating officer of VisionQuest National Ltd., a behavioral health services provider. From 2015 to 2017, he worked part-time as the chief executive officer for Youth Services Agency, a non-profit social services agency. In 2017, Kassa co-founded Family Foundations Partnership and is currently its chief executive officer.

A resident of Perkasie, Kassa earned a Bachelor of Liberal Arts from Penn State University in 1993. He earned a Master of Public Administration from Villanova University in 2007.

About the Pennsylvania Biotechnology Center (PABC): Launched 15 years ago, the PABC is a nonprofit life sciences incubator-accelerator, offering state-of-the-art laboratory and office space to early stage biotech companies, as well as the Hepatitis B Foundation and Blumberg Institute. Managed by the Blumberg Institute and led by a board appointed by the Foundation, PABC has nearly 80 member companies, mostly small to mid-size science, research and pharmaceutical companies. Close to 50 of those companies have on-site operations. The center uses a highly successful services-based approach to nurture and guide its member companies to success, advancing biotechnology, maximizing synergies among nonprofit scientists and their commercial colleagues, and launching new ideas and discoveries that will make a difference. PABC is just outside of Doylestown, the Bucks County seat, in the heart of the Philadelphia-New Jersey pharma belt. The PABC website provides details about PABC membership options and upcoming events. To make a donation to the PABC, click here.