The Hepatitis B Foundation today (Oct. 5) is celebrating the news that Harvey J. Alter, M.D., has been selected for the 2020 Nobel Prize in Physiology or Medicine, along with   collaborators Michael Houghton, Ph.D., and Charles Rice, Ph.D.

Dr. Alter is the W. Thomas London Distinguished Scientific Advisor to the Hepatitis B Foundation and an Honorific Professor of the Baruch S. Blumberg Institute, which is the Foundation’s research arm. He received the Hepatitis B Foundation’s Distinguished Scientist Award in 2000. Dr. Rice, who is a professor of virology at Rockefeller University, has been Scientific Advisor to the Blumberg Institute’s research programs.

The Nobel Prize was awarded to Drs. Alter, Houghton and Rice today for discovering the hepatitis C virus, which is a landmark breakthrough that the Nobel committee said had “made possible blood tests and new medicines that have saved millions of lives.”

“We are thrilled, but not at all surprised, that these great scientists are being recognized with such a prestigious honor,” Timothy M. Block, Ph.D., co-founder and president of the Hepatitis B Foundation, said. “The discovery of the hepatitis C virus is one of the major triumphs of modern medical science and provided the basis for discovery of a cure. Their work has benefited millions of people around the world.”

Dr. Block added, “Dr. Alter has been a longtime supporter of our research in hepatitis B and his advice and counsel has been tremendously valuable.”

Given the current global COVID-19 pandemic, Dr. Block said, this year’s Nobel Prize in Physiology or Medicine is especially gratifying as it draws attention to value and benefits provided by good science. 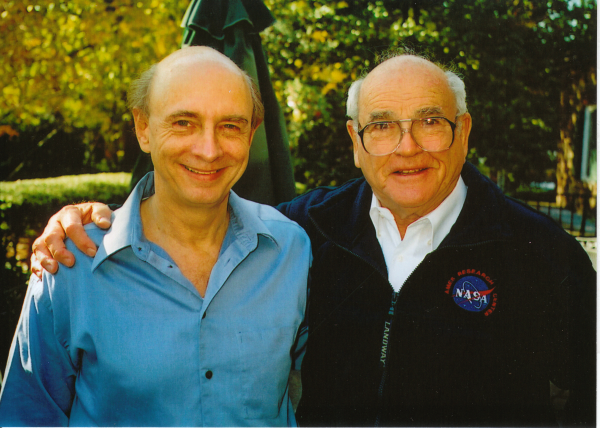 Dr. Alter (left) and Dr. Blumberg, both winners of the Nobel Prize, at our Princeton Workshop in 2002.

Dr. Alter’s research while at the National Institutes of Health (NIH) uncovered the fact that there was an infectious virus, which was neither hepatitis A nor B, infecting people who had received blood transfusions. Not only did his work ultimately lead to important diagnostics and life-saving treatment, but Dr. Alter’s research also resulted in nationwide blood screening, which has nearly eliminated transfusion-associated hepatitis. Before his groundbreaking research in hepatitis C, Dr. Alter was part of the team that discovered the hepatitis B virus, alongside Baruch S. Blumberg, M.D., D.Phil., who won the Nobel Prize in 1976 for that discovery.

Dr. Rice has been an advisor to the Hepatitis B Foundation since 2003, Dr. Block said, “So, we have had benefit of his brilliance and insights firsthand!”

Dr. Rice and Dr. Alter have participated numerous times in the Hepatitis B Foundation’s Princeton Workshop, which is a prestigious scientific meeting on hepatitis research.